"We have to love until it hurts. It is not enough to say, I love." We must put that love into a living action, and how do we do that? By giving until it hurts." Mother Teresa 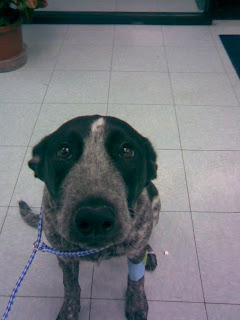 Sorry for the like 2 month abandonment of the blog. Most of my time has been consumed with coaching 8th grade girl's basketball. Today was an eventful day...
It all started on Monday. Loki has a penchant for putting everything in his mouth, much like a small child. He swallowed one of my dress socks whole-like one would eat spaghetti. I waited because this has happened before, and about 12 hours later he pukes them up. I waited until about Tuesday night and I was a little worried that it had not yet come out of either end...Wednesday I started calling vets. (I had also already two basketball games this week with a third scheduled for night, and I have been fighting a nasty cold since Sunday.) I have not yet found a vet up here. I called an area vet who said as long as he continues to eat and go the bathroom (and not vomit) normally I should just be on the lookout....
Which brings me to today.
330a I hear the tell-tale signs of Loki puking. It is not a gagging sound, but a loud thumping-it's bizarre. At this point I knew that the sock was not going to come out naturally. I tried calling the vet up here to get their emergency numbers, and their message cut off before it got that far, I will be calling to inform them tomorrow. Then my internet was down, so I could do is call my vet in Indy that does have 24 hour emergency care. They told me that I better come down. So I attempted to pull myself together, and clean up the 4 pukes that occurred between 330a and 340a (no joke). After he puked he was running around and playing. Then when he heard my car keys he got really excited. I make it to Indy before 6. Excellent timing.
I get to the vet they see me immediately, took the xrays and then told me what I already knew. Surgery. Then they went through the awful cost, but I don't have much of a choice. I was told that he would be in surgery by 930. Then there would be at least a 2 day hospital stay. By 630a I have left my baby at the vet, and gone to Mom and Dad's. They were actually the third phone call I made, and I am grateful they answered, and didn't sound too pissed about the 330a wake up call. Dad greeted me with a giant hug. Then I ate and actually managed to fall back asleep.
Next thing I know Kim is waking up to let me know it was 1030a, and she was leaving for work. I called the vet to get a status update on Loki. No surgery until sometime between 12p and 1p. Ugh. I just wanted done and over so he could start recovery, and I could get back up to my place to repuppy-proof my apartment. They started surgery right before 1, and thankfully he was done by 220p.
I go in to see him around 3p. He was still very groggy, but walking. He came in walked around for 3o seconds and collapsed on the floor. My poor baby. His incision is pretty big. (pictured above. Including two pics one 30 minutes after surgery, and then 4-5 hours after surgery) I stayed for about 30 minutes, and then forced myself to leave so he could get some sleep.
The whole day my dad was very worried about me and the pup. If they had cots at the vet Dad would probably spend the night right by Loki. Well Dad stopped in after work, and called me. Loki is a little bit peppier. And very clingy. Loki is normally not a very clingy puppy, but when he doesn't feel good he does. Much like myself. Loki was already back to getting into trouble and getting into the plant they have in their waiting room. Dad did stay and nap a little bit with Loki. I wish I could be there too, but I know that the fam is going to go in a see him quite a bit until I can get back down there.
In other puppy news, at just under 6 months old Loki is beastfully weighing in at 46 pounds, has lost all of his puppy teeth, and has been graduated to full dog chow. And of course has quite the war wound from the damn sock, which was found half way through his intestine, and the sock was fully intact.
Posted by jules at 5:34 PM